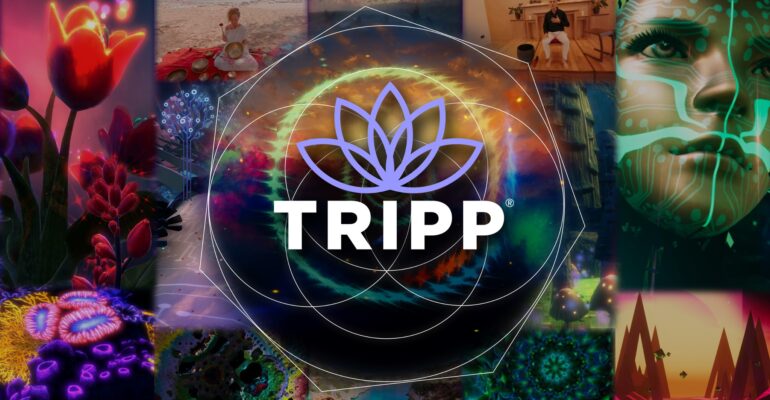 Our new series ConsciousWorks is featuring transformative tech companies looking for talent.  Check out TRIPP’s open positions on our job board.

One late night in September 2016, Nanea Reeves had some friends over to experiment with virtual reality. She recorded a snippet of the evening and posted it on Instagram.

“This is what dorky people do on a Friday night — VR party,” she said in the recording, which shows people smiling, laughing and fully immersed behind VR headsets.

Reeves was an investor in headset maker Oculus and had experimented with the technology by helping build a solitaire app in VR.

After using one of the devices, Reeves recalls one of the women turning to her, wide-eyed, and saying: “Thank you for giving me an experience as close to Ecstasy without actually having to take it.”

“It was like a lightbulb went off,” Reeves says, remembering that night. “I thought, could we use VR to create different states of consciousness … like states of calm and focus?”

She later went on to pitch her idea for a “digital psychedelic wellness company” to investor Tim Chang, who had talked publicly about wanting to fund a venture that looked like the Netflix of psychedelic trips.

Chang was on board, and in 2018 Reeves and her founding team launched TRIPP, a research-based wellness platform that immerses users into alternate realities to promote emotional wellbeing and transformative states.

The “tripps”, experienced through VR headsets, take users on a mind-bending journey of psychedelic visuals and binaural sounds. They are designed to elicit feelings similar to that of meditation: a deeper sense of calm, increased focus and reduced anxiety.

Since its founding, the Los Angeles-based startup has delivered more than 2.8 million sessions and raised $15 million in venture funding.

The latest round, an $11 million investment secured in summer 2021, was led by venture capital firms Vine Ventures and Mayfield.

The funding will give TRIPP the fuel to scale its business and grow its team of developers, data engineers and designers, says Reeves, the company’s CEO. By year end, TRIPP plans to add another seven employees to its current roster of 17. In 2022, the team is slated to double.

The investment will also help the company create more customized experiences and expand its distribution platforms. Currently, TRIPP VR apps can be found on Oculus and PlayStationVR. The company recently launched its first augmented reality experiences on the Nreal smartglasses.

“You’ll see that be a main focus for us over the next 12 to 18 months where we are going to launch on every new device that comes out and build that engine that can update every device we’re on,” Reeves says. “I see that as a key differentiator. I’ve done it before in other categories, whether it’s mobile gaming, console gaming or cloud gaming.”

Reeves’ background includes C-level positions with video game companies, including gaming juggernaut Electronic Arts, and smaller startups in the mobile communications industry. She’s been an advisor and an investor in such startups as Oculus, Haku and Saucey.’

Fitness for your inner self

TRIPP is being used in the home, the workplace and by researchers in the medical industry and academia to study the effects of non-chemical digital alternatives to manage mental health issues, including anxiety, depression and substance use disorder.

TRIPP’s tagline — “Fitness for your inner self” — is meant to convey a message that the product is more than a meditation app.

Users are guided through a variety of mental expeditions and interactive breathing exercises meant to boost mood and increase mindfulness amid a backdrop of engaging visual landscapes and a uniquely designed soundtrack.

Reeves’ vision for the company is much broader. It includes building more targeted solutions to address specific mental health concerns and developing an active data-producing community that drives machine learning and innovation. The TRIPP platform already collects data on every session with the intent of training it to learn over time how to tailor experiences to individuals.

“I really believe in the vision of computing moving from the hand to the head,” Reeves says. “We’ve been walking around with our heads down staring at this small screen. But when we can get looking up and outward and seeing the world differently through these reality overlays that can take you all the way to full immersion, from a product standpoint, that’s where you’ll see TRIPP evolve,” she says.

And through the recent acquisition of PsyAssist, a company that developed an app to support psychedelic therapies, TRIPP is launching a new product for clinicians and researchers using such techniques in their practices.

TRIPP PsyAssist will be used to support psychiatric clinics and researchers working with ketamine, a Schedule III drug being used to treat major depression and severe PTSD, and studying MDMA and psilocybin, to reduce patient anxiety before, during or after treatment.

The formation of TRIPP was also born out of Reeves’ personal life experiences, including the death of her husband Vic Anderson in 2015 from liver cancer.

Meditation was a pillar of his life through a dedicated practice of Tibetan Buddhism. After his death, Reeves’ own meditation practice helped her feel less isolated and cut off from the world.

Her only regret is that her late husband wasn’t able to see TRIPP come to fruition.

“When I shared it with his grandson, he said ‘I feel like grandpa lives in there,’” Reeves says. “That was really cool, because there’s a part of me that understands if I didn’t have the journey with Vic, I don’t think TRIPP would have happened the way that it did.”

Working at TRIPP: First, the interview

As TRIPP grows its team, CEO Nanea Reeves is intent on avoiding the pitfalls of a typical startup hiring culture.

“There’s a tendency to get ‘Mr. or Miss Right Now’ and not think about what’s really important to us as a team,” she says. “And we made some mistakes along the way in our need to fill gaps in our skills.”

The company has gotten more rigorous in its hiring process to ensure, most importantly, that employees are motivated by TRIPP’s mission to use technology for good.

Reeves is also working with a DEI (diversity, equity and inclusion) coach to ensure the team is composed of people with diverse backgrounds and life experiences.

“it’s really hard when you’re a more product, engineered-focused company. You have to make an effort,” she says. “It’s so easy to say, ‘I have a friend,’ and everyone starts looking the same. We need that diverse contribution as well to have the greatest impact.”

Job candidates at TRIPP are typically interviewed by a panel and hiring decisions are made by consensus.

Reeves says the following questions can reveal a candidate’s emotional intelligence and how well someone might fit in with the company’s culture.

Working remotely has allowed the company to add staff based outside of Los Angeles.

“We have a few employees in Oregon, and our new CTO just joined us from the Bay Area,” Reeves says.” “It really opened up our talent pool.”

Currently, TRIPP is looking for both a Project Manager, QA Manager with direct experience in XR development and an Analyst/Account Manager who can help manage our partner relationships.  TRIPP is also looking for creators who want to distribute or develop their transformative experiences on the TRIPP platform.  Email info@trippinc.com for more information.