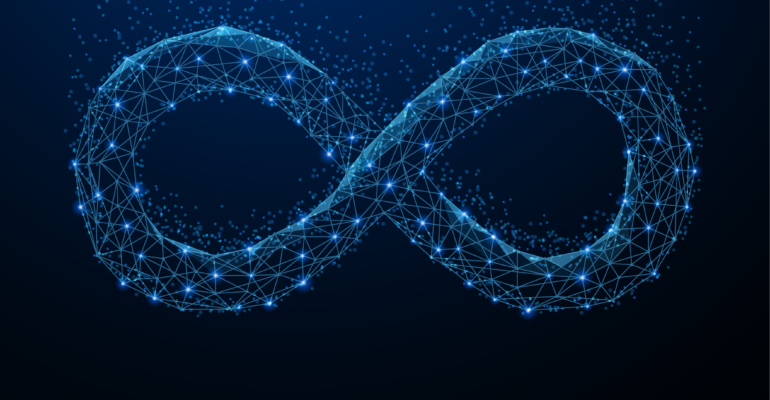 INFINITY is the concept of something that is unlimited, endless, or boundless. It was first represented as a symbol (a horizontal eight) by John Wallis as early as 1655. (Wikipedia, 2021) It was imagined as a special variation of Ouroboros Snake – an ancient symbol depicting a serpent or dragon biting its own tail. Today, INFINITY is technically referred to as Lemniscate. “It caught on quickly and was soon used to symbolize the concept of INFINITY or eternity in a variety of contexts. For instance, in the 1700s the INFINITY symbol began appearing on the Tarot card known as the Juggler or the Magus. It is an interesting coincidence that the Kabbalistic symbol associated with the…Tarot card is the Hebrew letter א (pronounced alef), for Georg Cantor, the founder of the modern mathematical theory of the infinite, used the symbol אo (pronounced alef-null) to stand for the first infinite number.” (Rucker, 1995)

INFINITY is a word we use to understand mathematics, the physical, and metaphysical. There is much more to this word than any of us have been taught or learned in our present lifetime or previous lifetimes. INFINITY represents antiquity, present, future, universe, super consciousness, oneness, and infinite possibilities to name a few. It is much more than the knowledge domains we have come to understand this concept through our infinitesimal human consciousness. INFINITY is quintessential. It is life expressing. In other words, it is life happening, evolving, transforming, experiencing, and being. You are infinity expressed. As an individuated rendition of the omnipotent and omnipresent oneness.

The next stage of Human Enhancement is more than coming to an understanding of current known phenomenon about INFINITY or any other concept that is mysterious and esoteric in our world. Rather it is rooted in each person’s ability to Embrace Unknown Certainty and to take deliberate action to Unleash Your Greatness. In a previous TransTech Learning Pod (TTL POD), Dr. Shinshuri discussed the INFINIFTY PRINCIPLE, which is a newer and expansive perspective on the meaning of INFINITY and the PRINCIPLES governing who we are and our co-creative role in the transformation and expansion of our lives since the beginning of time or, in other words, since the inception life. INFINITY has rarely been presented as a principle or in the format and framework shared in the TTL POD.

The TTL POD presents familiar epistemology (e.g., spiritual tenets, principles, concepts, processes, procedures, methodologies, etc.) that has been with us for eons but presented in a new and exciting context leveraging extant spiritual and scientific methodologies. As discussed previously in this article, the Lemniscate symbol is the technical and mathematic representation of the INFINITY PRINCIPLE. The foundation of this principle is rooted in the following:

To learn more, watch the recorded archive. Dr. Shinshuri will illuminate more about the INFINITY PRINCIPLE and answer the following questions. How it helps us move through space time continuum as living superconscious beings with unlimited potential? What is your cosmic age? What will you do with your EM Dash? 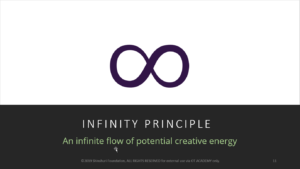 Dr. Shinshuri is the founder of Shinshuri Foundation and Executive Director of Oracles of Truth Academy. Watch this space for follow up discussions about this amazing sector and learn how you can cultivate supernatural intelligence for yourself.