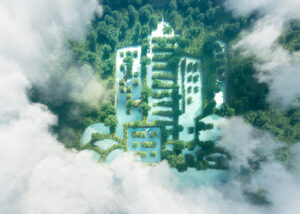 For reasons discussed below, we must start by acknowledging that our topic, ‘smart green spaces’ is fraught with controversy. Certainly, as a landscape architect, I am aware that many colleagues feel that a beautiful natural landscape should show no trace of the hand of man, let alone come embedded with its own networked array of high technology, however responsive! Consequently, I feel obliged to preface our overview of this purportedly troubled relationship of technology and nature with a brief paean of praise for Mother nature at what, many feel, is her darkest hour: Forests burn, seas swell with plastic, biodiversity plunges and the pandemic rages across the face of the globe. Moreover, if man is to class technology as ‘smart’, then he also needs to acknowledge that nature is ‘super smart’. Janine Benyus, Scientist and author of ‘Biomimicry: Innovation Inspired by Nature’ believes that most of the problems that have ever existed have already been solved by nature. Flowers for example, can be seen as nature solving a propagation problem whilst delighting the birds, bees and even flies, which have been known to engage in a form of insect pornography, whilst under the influence of this ‘supernormal stimulus’: ‘So effectively are the fly’s mating instincts hijacked by this sexual mimicry, that he ejaculates on the flower, all the while loading himself with pollen.’ (1) Awesome Awe To further acknowledge nature’s genius, whilst also indicating how technology might augment this innate capacity, I would like to point to the mind-altering qualities of natural awe: ‘Awe is so powerful, it alters your sense of self, connects you with humanity and boosts your mind and body.’ (2) And there’s a surprising way to acquire more awe, have you ever been arrested by a sublime view, or overwhelmed by the vastness of the night sky? Or have you ever orbited the earth like the astronaut Edgar Mitchell, who had an epiphany, that changed his life and transformed his outlook, after witnessing the ‘irreplaceable preciousness’ of our blue planet. He is on record as wanting to take politicians by ‘the scruff of the neck’ and force them to undergo the “overview effect” in the vain hope that such an experience might transform environmental policy! This is where technology can step in and bring the overview effect within reach of the man in the street or rather the man or woman who has access to an isolation tank, and a waterproof VR headset. Such an experiment is currently being carried out at Missouri University, in the avowed hope that ensuing epiphanies will encourage a growing body of environmentally friendly policies, as well as pro-social and pro-planet states of mind and being. “There’s a lot of division and polarisation and disconnection between people,” said Steven Pratscher, a psychologist and principal investigator in the trials at the University of Missouri. “We’d like to see if we can recreate the overview effect on Earth to have an impact on those issues.” (3) It is at this juncture, that we need to recognise that our brains are not exclusively fixated on the direct experience of nature, but rather we readily respond to images, videos and virtual representations of natural scenes too. The difference in response is yet to be fully established, though it may relate to the degree of individual immersion. In this respect, it should be noted that scientists have traditionally preferred to carry out their investigations into human responsiveness to nature under the controlled conditions of a laboratory to ensure accuracy, predictability of context and hence validity of their experimental results. However, using a more subjective and practical research approach, the impact of awe-inspiring imagery has been studied by professor Melanie Rudd in an actual retail setting, where she confirms that ‘awe’ can indeed induce pro-social behaviour and as part of a more generous pro-social outlook, it encourages a willingness to purchase more consumer items than might normally be the case! Case Study: Tech augments the reality of climate change! A significant development in the ‘troubled’ but increasingly symbiotic relationship enjoyed by tech and nature is their mutual ability to dramatically raise environmental awareness. It is considered by many to be key to the process of successfully persuading mankind to step back from the brink of climate change catastrophe. As environmental artist Thijs Bierstecker claims, in his TED-talk on the 50th anniversary of Earth Day, science has given us compelling evidence of the climate emergency for the past 50 years, but we have stolidly paid little or no attention to it so he has concluded that we must be made to ‘feel the facts’. Technology, he argues, has the power to perform this sleight of hand and with the help of scientist Stefano Mancuso, from the International Laboratory of Plant Neurobiology in Florence, he has created an artwork called the ‘Voice of Nature’ which is exhibited in the gardens of the Fondation Cartier in 2020. The artwork speaks directly to the impact of mankind on the nature of the city: Pollution levels from daily traffic jams and droughts generated by the heat island effect in a major city, combined with other factors influential to the growth and development of trees, are painstakingly monitored by 12 separate sensors. The collected data is then displayed as evolving tree rings of light, projected as an incandescent aura to the rear of each tree. Bierstecker also adopts a technological approach to highlight the problem of plastic waste deposited in our oceans in the installation ‘Plastic Reflectic’: The installation reflects its audience in plastic pixels made from ocean plastics from around the world: ‘The pixel grid of 601 waterproof engines under the bio-based water are controlled by motion sensors that capture the movement and outline of its spectators.’ (4) The artistic outcome is a portrait of the individual visitor with a digital record of his every movement writ large in plastic. In a similar vein, environmental artist and social impact designer Daan Roosegarde uses immersive tech to effectively engender the illusion of […] 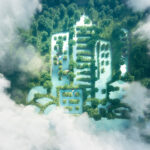